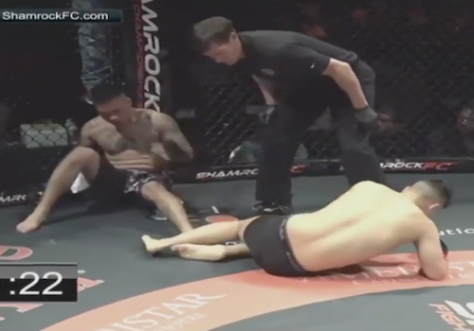 Alex Vasquez and Axel Cavares only lasted 99 seconds into their all-out brawl before both fighters found themselves on the floor.

The MMA rivals had an extremely unpredictable result to their match.  After the early stages of the fight were spent trying to dominate each other on the ground, both fighters then got to their feet.  Vasquez moved forward with a big right hand coincidentally at the exact same time Cavares decided to throw a right hand with a lot of weight behind it.

Both fighters went down with Vasquez toppling over while Cavares slid down the cage onto the floor.  Vasquez managed to pull himself up first but emerged from the canvas with a severely broken nose.