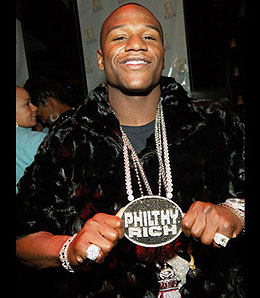 The misdemeanor charge stems from allegations he repeatedly poked a Southern Highlands security officer in the face following a Nov. 15 confrontation over a parking citation.
Mayweather is being held at Clark County Detention Center on no bail.
According to court documents, Las Vegas police said security guard Shayne Smith cited two of Mayweather’s vehicles for parking violations at Southern Highlands. A confrontation ensued, and the boxer allegedly was verbally abusive and jabbed his finger into Smith’s cheek. Smith had redness and discoloration on the left side of his face after the incident.
Although Mayweather was charged on the offense earlier this month, Justice of the Peace Tony Abbatangelo quashed the arrest warrant Dec. 7, the same day he signed it.
Prosecutors accused Abbatangelo of giving Mayweather special treatment, which he denied.
The charge could lead another justice of the peace to revoke Mayweather’s bail on pending felony charges stemming from a Sept. 9 domestic violence incident involving his three children and their mother, Josie Harris.
Mayweather, who is facing several felony charges, including felony coercion, grand larceny and robbery, is free on $31,000 bail in that case.
Since bail was set in that case, police have conducted two separate investigations into accusations made against Mayweather, including Smith’s.
Last month, Quincey Williams, a former Mayweather employee and one of two victims in the roller rink shooting, told police Mayweather tried to force his vehicle off Arville Road, near Spring Mountain Road.
The incident remains under investigation.